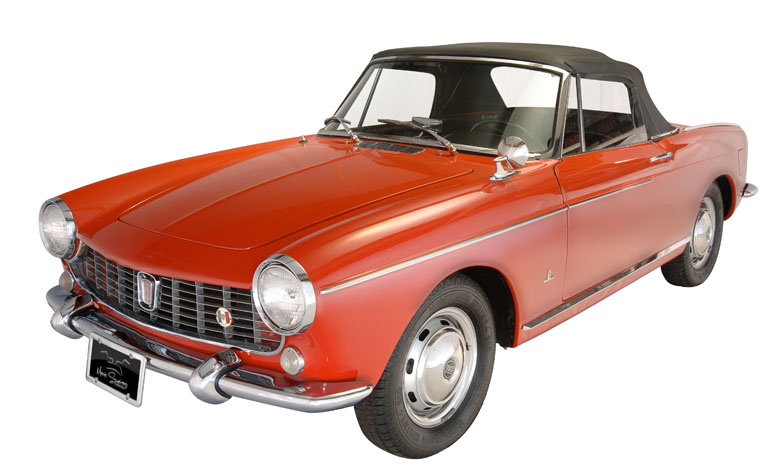 FIAT (Originally an acronym for Fabbrica Italiana di Automobili Torino) started building passenger cars in Turin, Italy in 1899. Over the next century, they grew immensely, branching out into many other industries, inluding trains, planes, marine engines, and civil engineering projects. Through a series of acquisitions and partnershops, they grew their market by manufacturing and selling cars in many other countries, around the world.
During the 60s they were the 4th or 5th largest car maker, behind the “Big Three” of Detroit. FIAT’s bread and butter has always been economy family cars. However there have always been sportier cars in the model lineup as well. At various times in its life, FIAT has had active racing programs.

The type 118 cabriolet cars was the result of a joint venture with the design studio Pininfarina (well known for their work with Ferrari). The mechanicals were adapted from FIAT’s popular 1300/1500 family sedan, and the bodies were built at Pininfarina.

The result was an inexpensive but sporty roadster that was well-regarded by reviewers of the time. In general, these cars were not particularly fast, but handled well and had style to spare. (For those looking for more performance, the 1500S and 1600S, with exotic OSCA twin-cam engines, were also available.) The history of the type 118 FIAT cabriolets of the 60s can be tracked to the type 103 FIAT “Nuova 1100” sedans, first introduced in 1953.

The previous unconventional front appearance of air-cooled Franklins had hampered sales. To combat this problem, the Series 11 Franklins featured a mock radiator shell…