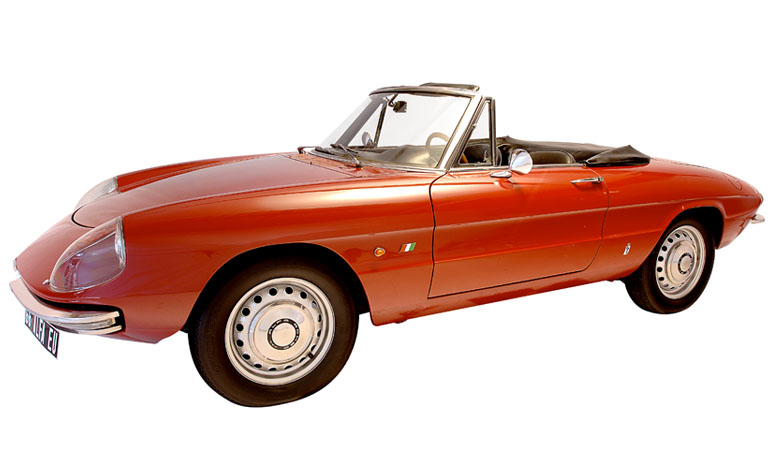 The Alfa Romeo Duetto was in production between the years 1966-1967.

Pininfarina, the famous Italian coachbuilder, was also responsible for the Duetto’s monocoque, or unibody, construction. The name ‘Duetto’ was suggested by Mr. Giudobaldo Trionfi of Brescia, during a competition launched by Alfa Romeo in 1966 to find a name for the 1600 Spider.

The Duetto was created by G.B. Pininfarina in 1966. A masterpiece as well as an icon, the Duetto was an elegant vehicle that continued in production all the way up to 1994 with very few stylistic and technical changes. Buyers who wanted to be noticed, but without flashy ostentation, the Duetto was vehicle of choice. Keeping true to the collective global image of Alfa Romeo, the Duetto carried the classic characteristics that made these vehicles legendary. The Duetto also carries the distinction of being the final car the Pininfarina designed, as he died just one month following the Duetto’s introduction in March of 1966. A total of 6,325 units were produced from 1967 until 1968. Though the Duetto was produced for only 12 months, the impact of its production is undeniably stamped in the history of Alfa Romeo. One of the all-time greats in the Alfa Romeo line-up, the Duetto has achieved the status of a true Sports Car in the traditional sense. Putting to shame the indistinguishable, fast depreciating Japanese and German efficient marvels, the Duetto had an elegant style and charm of good-breeding.

The Autobianchi Bianchina is an automobile produced by Italian automaker Autobianchi, based on the Fiat 500. It was available in various configurations: Berlina (saloon),…