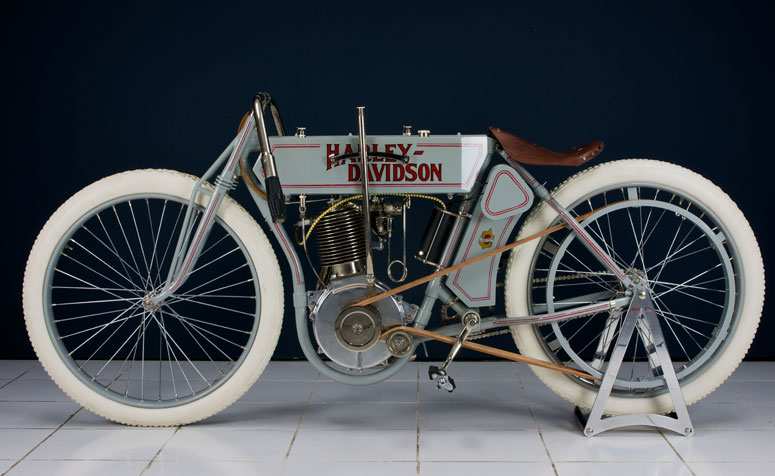 This had a single cylinder motor with 3-1/8-inch bore and 3-1/2-inch stroke yielding 7.07 cubic inches (116cc). They make a more powerful motor with the assistance of Ole Evinrude – better known as the inventor of the outboard motor. It is designed for use on the wooden velodromes where popular bicycle races are held.

This model used a belt drive and was designed as a racing machine. The Board Track Racer has all the feeling of the spirit of the day. From the straight pipe to the laid down seat and handlebars and absence of fenders for weight savings- it’s what it was all about.

The motorcycles designed for board-track racing had no brakes. Brakes were, perhaps ironically, considered more dangerous than not having them. The only way to stop the bikes was to flip a switch on the handlebar that grounded out the charging system, and then coast home.

This bike is a conversation piece at its best and draws a crowd wherever it is shown.

This creation is inspired by the bravery and bravado of the racers and the danger of the sport during that incredible time. Truly when men were men.

The Isetta was one of the most successful microcars produced in the post-World War II years—a time when cheap, short-distance transportation was most needed….