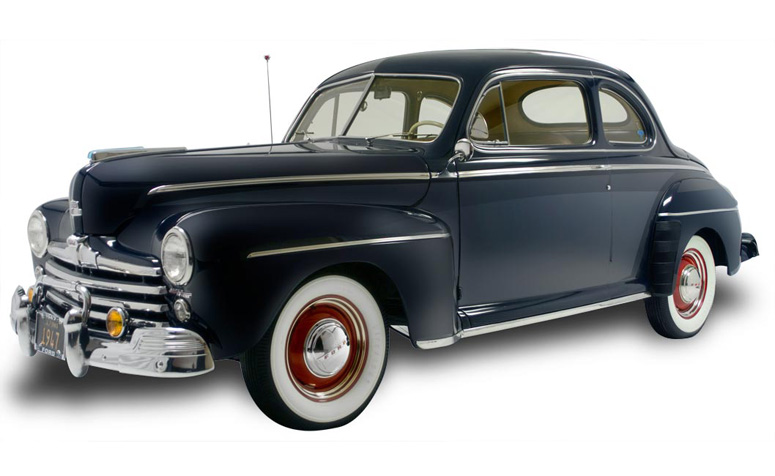 Civilian production resumed in July 1945, with an early start to the 1946 model year filling the public’s thirst for new cars. Ford had a number of leftover 1942 body parts that went into 1946 Ford models.

The 1946 Ford was identical to the 1942 model under the skin, though a heavy new grille with horizontal bars and red accents modernized the car somewhat. The hood was widened by adding a center strip. One notable change was to use the 239 CID engine which since 1939 had been used in Mercury and Trucks, and capable of 100 hp (75 kW)for the first time.

One big difference for 1946 was the interior. While the DeLuxe looked pretty much like the 1942 in drab browns, the Super DeLuxe looked striking in navy blue and gray. The dash plastic over a navy-colored dash was pearl gray with red striping.

The instrument numerals were red on a black field with a chromed speedometer needle and clock hands. (An electric clock was standard on the Super DeLuxe beginning in 1942.) When one turned on the headlights at night, the gauges glowed beautifully with the red numerals backlit and the edges of the chromed needles outlined in white light. By far the most popular 1946 Ford was the Super DeLuxe Tudor sedan, of which 163,370 were produced