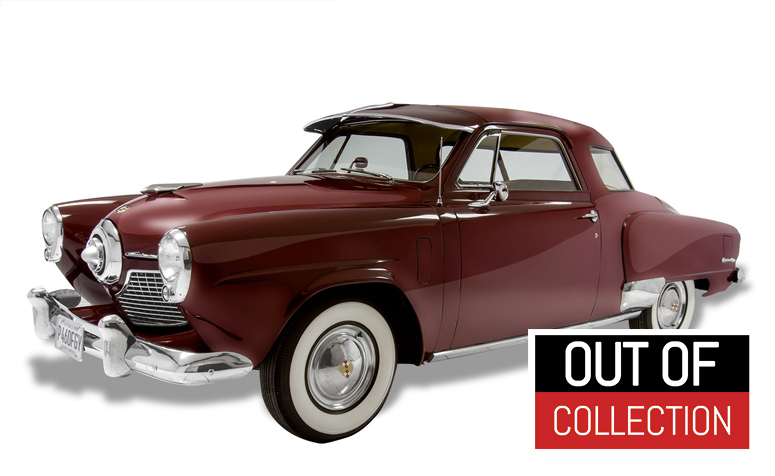 Studebaker was a company with a reputation for producing impressive car designs. When it brought out the famous “bullet nose”, many thought it to be a radically new idea; too radical for the times. Actually, Studebaker and other companies had played around for a few decades with the idea of a bullet nose cone shape as part of the design for the front view of a car. It did not start with the 1950 Studebaker Champion but was used on the 1948 Tucker as a third headlight. Even Studebaker had been playing with the idea for several years. Tucker had used a bullet nose in 1948 and Ford also had a form of bullet nose on their 1949 club coupe and Oldsmobile used a version on their concept car in 1956. Studebaker produced 343,164 cars in 1950 and 268,564 cars in 1951. If those figures hold true, then there was a total of 611,728 Studebakers parading that nose job.
In 1947, Studebaker’s independent designer Raymond Loewy concepts were executed by Virgil Exner and the Studebaker cars in 1947-1949 marked the first major re-design since the end of World War II. Loewy discovered that Exner was working behind his back trying to have himself become the main designer for Studebaker. Loewy then fired Exner and replaced him with Studebaker’s staff designer Bob Bourke who then worked in Loewry’s firm helping design the 1950 models. The bullet nose design is generally credited to Bob Burke who had been drawing a bullet nose design since 1941. Although some Studebaker staff did not appreciate the boldness of a design which brought back the idea of airplanes so shortly after World War II, Loewy was able to sell them on the overall look of the car with the streamlined projection.

The bullet nose models were in three different sized vehicles: the Champion, the Commander, and the Land Cruiser. The front end of these vehicles was matched with large wrap-around rear windows making for spectacular cars and the people joked, “Which way is it going?” Studebaker had reached sales records with its 1947-1949 models and the company had high hopes that new 1950 models would do as well. Studebaker found the designs were very much accepted by the public as it introduced a new V8 engine and an Automatic Drive transmission. The factory at South Bend added a third shift and the factories in Southern California and Canada were working near capacity.

Studebaker reached its peak years for sales and employment with the 1950 and 1951 bullet nose models. It had changed the rim that surrounded the bullet on the 1951 model from a chrome ring to a painted ring but increased the size of the chrome grill to keep its shiny chrome effect.

The celebration of the successful years for Studebaker was moderated by the Korean War and the company felt required to help again in a war effort.