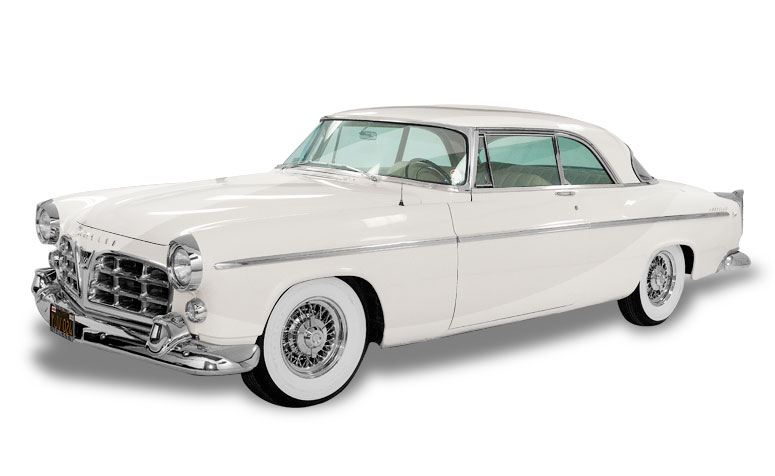 In 1955, Chrysler introduced the C300. The ‘C’ stood for coupe and the 300 was the horsepower rating of the original Hemi engine equipped with , two four barrel carbs, solid lifters, special manifolds, and enlarged dual exhausts. This vehicle gave the Chrysler Corporation a performance and sporty image, a much needed persona in this post World War II era. Many European manufacturers, such as Jaguar and MG, had introduced high powered, small, responsive sports cars. American manufacturers countered with the Chevrolet Corvette and the Ford Thunderbird.

The Chrysler 300 was outfitted with a hemispherical (Hemi) combustion chamber 5.4 litre V-8 that produced 300 horsepower and matted to a performance modified two-speed ‘PowerFlite’ automatic gearbox. The body came from the New Yorker; rear quarter moldings were compliments of the Windsor. The two piece grille came from the Imperial. An improved suspension was implemented to provided sporty and responsive handling. The base price was $4,055. Sales of the C300 were fueled by its success on the stock car circuit. The C300 dominated the sands of Daytona Beach, Florida where it won the stock production class and took home the Tom McCahill trophy. From 1955 through 1957 it was the fastest American car. 1955 was a special year for Chrysler, as they won the NASCAR Grand National Title and AAA championship by winning 33 races and finished first in class at Daytona’s Flying Mile. The C-300 established Chrysler as a dominate force in NASCAR racing and speed events for years to come. Some people even consider the C-300 the original American muscle car.