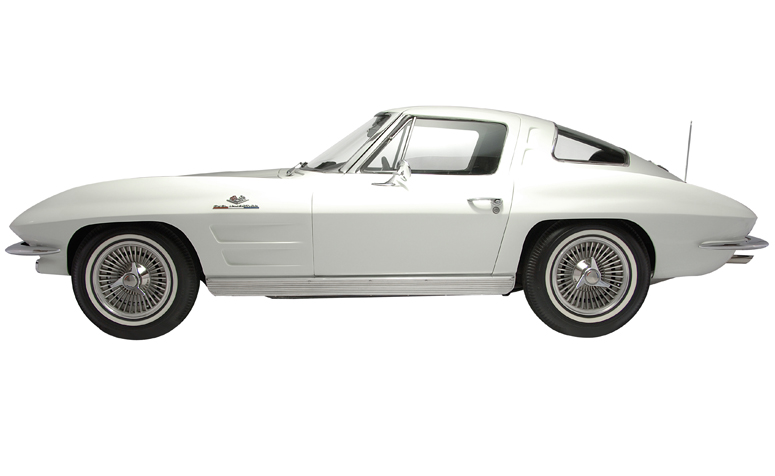 In 1963, Corvette introduced its all new Corvette Coupé and Convertible models called the Sting Rays. The car incorporated a boat-tail taper that was common of sporting roadster of the 1930s. The back featured a Bugatti Atlantique and Bertone BAT inspired split rear-window. This styling was replaced in 1964 with a single piece because of drivers complaining about visibility problems. The headlights were concealed in the front and would ‘pop’ out when in use.

New plants in St. Louis, Missouri were opened to keep pace with the vehicles popularity.

This was the very first time Corvette was available as a hardtop coupe model as well as the traditional convertible. The wheelbase was shortened by four inches to 98 inch. This, along with independent rear suspension, improved the handling and maneuverability. The steering ratio decreased from 3.4 to 2.9 turns-to-lock. Hydraulically assisted power steering was also offered for the first time. The drum brakes were still used. The optional sintered metallic linings and finned aluminum brake drums were offered and allowed greater fade resistance and better cooling. The body was mounted on a new chassis wîth independent rear suspension. However, under the hood was the familiar 327 cid V-8 from the previous year. The standard engine produced a somewhat lackluster 250 horsepower, but the top fuel-injected model would produce up to 260 h.p.

Civilian production resumed in July 1945, with an early start to the 1946 model year filling the public’s thirst for new cars. Ford had…