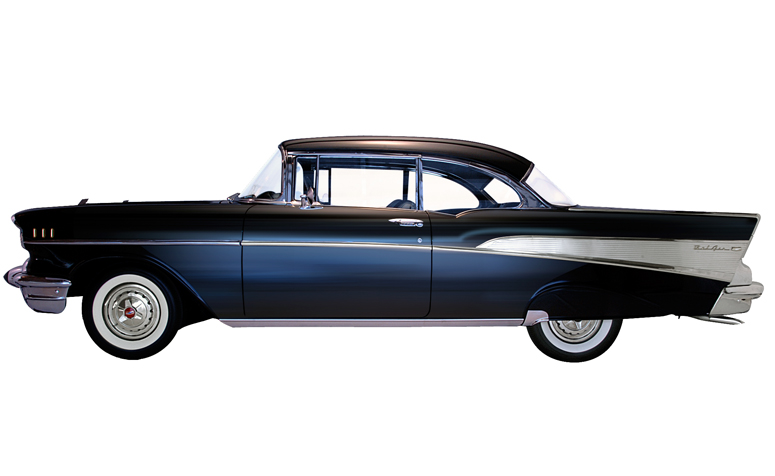 Chevrolet called their ’57 line “sweet, smooth and sassy”, and the Bel Air was exactly what America wanted – a junior Cadillac. Finny, trim and handsome, and with Ed Cole’s Super Turbo-Fire V8, it boasted one of the first production engines to pump out one horsepower per cubic inch, and was the first mass-market “fuelie” sedan with Ramjet injection. Chevy Copywriters screamed “the Hot One’s even hotter”, and Bel Airs became kings of the street. Production that year broke the 1 ½ million barrier and gave Ford the fright of its life. The trouble was that the “Hot One” was forced to cool it when the Automobile Manufacturers’ Association urged carmakers to put an end to their performance hysteria. Today, the Bel Air is one of the most widely coveted US collector’s cars and perfect embodiment of young mid-Fifties.

Immediately after it was introduced, it was rightly hailed as a design classic. Elegant, sophisticated, and perfectly proportioned, the 57 Bel Air is one of the finest postwar American cars of all.

The ’57 Bel Air sums up America’s most prosperous decade better than any other car of the time. Along with hula-hoops, drive-in movies, and rock’ n’ roll, it has become a Fifties icon. It was loved then because it was stylish, solid, sporty and affordable, and it’s loved now for more or less the same reasons; plus it simply drips with nostalgia.