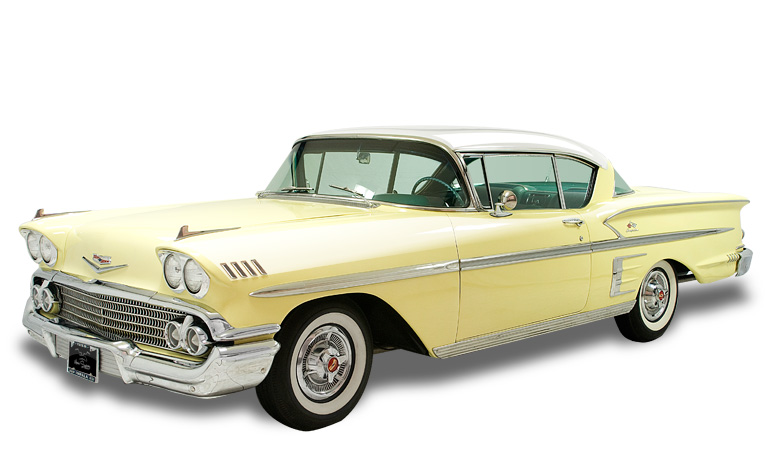 The Chevrolet Impala is a full-size automobile built by the Chevrolet division of General Motors introduced for the 1958 model year. The Impala was positioned as top of the line Bel Air coupes and convertibles. Chevrolet’s most expensive passenger model through 1965 had become the best-selling automobile in the United States.

It was a change from the 1955–1957 shape that was itself a substantial move away from the conservative Chevrolets of past years, longer, lower, and wider than its predecessors. The sharp tailfins gave way to deeply sculptured rear fenders. Three taillights each side would become an Impala hallmark whereas lesser models had two and wagons just one. Special crossed-flag insignias sat above the side moldings plus bright rocker moldings and dummy rear-fender scoops. 1958 was the first year of dual headlamps.

In all, 55,989 convertibles and 125,480 Sport Coupes were built, 15 percent of production. No other series included a convertible. Chevrolet’s most expensive passenger model through 1965 had become the best-selling automobile in the United States. It helped Chevrolet regain the number one production spot in this recession year.

Goggomobil was a series of microcars produced in the Bavarian town Dingolfing after World War II by Glas. Glas produced three models on the…