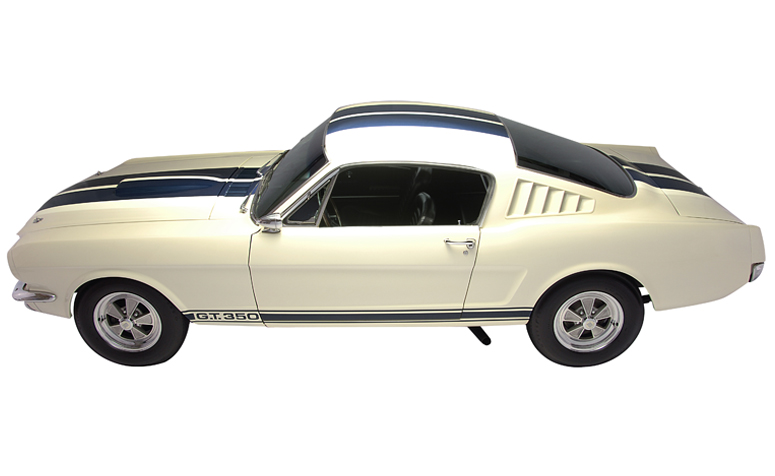 Ford turned to SCCA racing to stir even more popularity for the car and to prove its true potential. Unfortunately, SCCA rules for sports cars required two seats which the Mustang failed to qualify for since it had seating for four. The Mustang was a new breed with plenty of room to grow and improve. Ford turned to the legendary Carroll Shelby who had aided them in securing a LeMans victory with their GT 40s. He was also well known for his Ford powered Shelby Cobras which had dominated the SCCA circuit for many years. 100 examples needed to be produced by January 1st, 1965. Amazingly, the cars were ready to go by the due date, all painted in Wimbledon White livery with Guardsman Blue stripes.

Under the fiberglass hood was a K-code engine that had been modified with 715cfm 4-barrel carburetors on high-rise intake manifolds, aluminum oil pans and fabricated tube headers feeding dual exhausts with glass pack mufflers. The engine was concealed with a fiberglass hood. An aluminum case Borg-Warner T-10 four-speed manual gearbox was matted to this potent engines and set power to the rear wheels. The suspension was reinforced with front A-arms, rear axle trailing arms, and Koni shocks. The brakes were enlarged and quick steering adapters were installed. Complying with the two seater requirement was easy; the back seat was removed and replaced with a fiberglass package shelf.