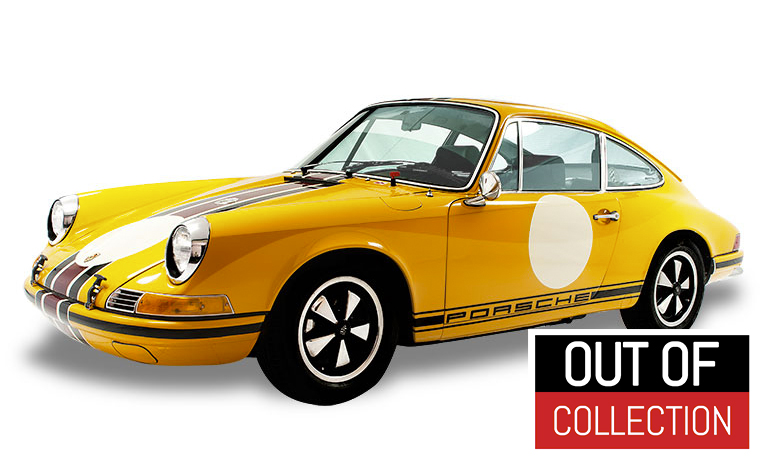 In 1970 the C-series 911 was introduced. All engines got a 4mm larger bore that upped displacement to 2165cc. Some other changes were made to the engine, and because of the increased power the clutch diameter was increased 10 mm.The new engine had only small differences between European and US specifications. The ‘T’ now had 125 bhp, the ‘E’ 155 and the ‘S’ 180 bhp.

On the chassis, the front-strut upper attachments points were moved 14mm forward, which reduced steering effort and kickback. Fuchs 6Jx15 wheels were now standard on all models, but more comfortable 14 inch wheels were available as an option.

To lighten the car the C-series E and S models got an aluminium engine-lid, and partly aluminium bumpers. In 1970 a special light-weight version of the ‘S’ was developped. This car weighed only 838 kg and was stripped of all unnecessary features. Engine lid and bumpers were made out of aluminium. Light-weigth seats replaced the normal seats. Even the door handles were replaced by cords. This car was ment for the track, but most were delivered, with the M470 option, making the car suitbable for road use.

In 1971 the D-series replaced the C-series. The D-series featured galvanized underfloor areas that were coated with PVC to make the car better resistant to corrosion. In the next years more bodyparts would be galvanized. From 1975 on the 911’s were produced with a completetly galvanized body. It’s estimated that more then 80% of all Porsches still exist and the galvanzing probably played a large role in this. The 2.2 911 could be recognised by the 2.2 label in the shape of the boxer engine on the rear window. The 1971 model also had a additional sticker showing Porsche’s racing victories in 1969 en 1970. The 2.2 engine didn’t stay very long. In 1972 the engine capacity was further increased to 2341cc (the 2.4).