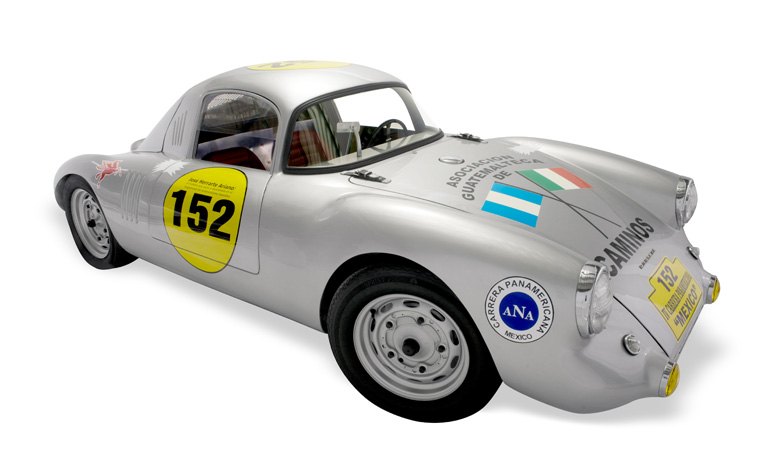 The first of the 550 series was born because Porsche fashioned a rod for its own back with its successes at Le Mans. The only cars made to this design were built in 1953 by Wilhelm Hild. Weidenhausen of Frankfurt was contracted to make aluminum body. According to critics of the day, the new car wasn’t the most elegant design effort from Erwin Komenda. Its rounded tail was oddly shaped and its low nose was flanked by tall, clumsily formed front fenders. A deeply curved windscreen and a tapering hardtop were part of the original design

550-02 was built with Ford Taunus teardrop headlamps. These were changed before Le Mans to conventional vertical headlamps. For the 24 hour race it was given additional driving lights. Two driver-journalists shared 550-02 at Le Mans in 1953: Paul Frere and Richard von Frankenberg. At Freiburg, on August 9, 1953, 550-02 won his class, clinching the 1500cc sports racing championship in Germany. Porsche arranged to sell them to the Automobile Club of Guatemala, so Porsche prepared the 550-02 for the fourth Carrera Panamericana, a grueling five day race over 1,912 miles that begun at Tuxtla Gutierrez in southern Mexico.

Before the end of August, the car was on the Atlantic Ocean. For the attack on the Carrera, beginning on November 19, José “Chepito” Herrarte Ariano, a wealthy Guatemalan coffee grower, drove 550-02. Herrarte salvaged the 1.6 liter Sports-class victory for Porsche, winning first place in his category and placing 32nd overall. The second and only other finisher in the class was a stock 356 Porsche. In January 1954, he held at Buenos Aires the 1,000 kilometer race in which Herrarte finished 4th in his category and 13th overall. After these events, the trail of 550-02 fades.

The LaSalle was an automobile product of General Motors Corporation and sold as a companion marque of Cadillac from 1927 to 1940. The LaSalle…