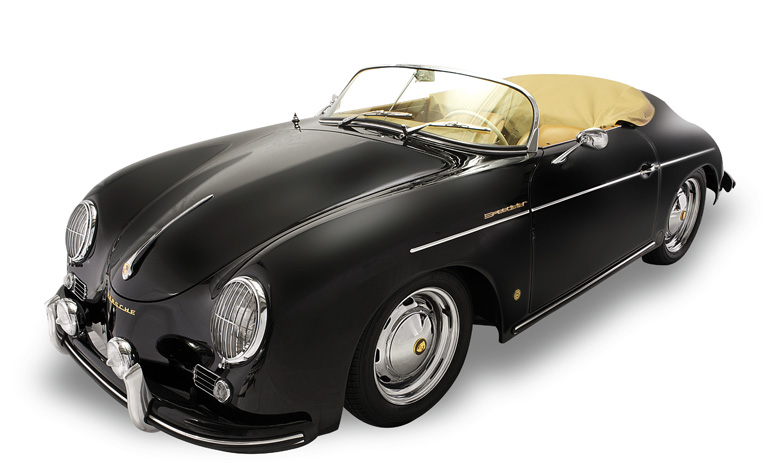 The Porsche 356 was the company’s first production automobile. It was a lightweight and nimble handling rear-engine rear-wheel-drive 2 door sports car available in hardtop and convertible configurations. Design innovations continued during the years of manufacture, contributing to its motorsports success and popularity.

Production started in 1948 at Gmünd, Austria where approximately 50 cars were built. In 1950 the factory relocated to Zuffenhausen, Germany and general production of the 356 continued until April 1965, well after the replacement model 911 made its autumn 1963 debut. It is estimated approximately half of the total production of 76,000 356s still survive.

Cabriolets (convertibles) were offered from the start, and in the early 1950s sometimes comprised over 50% of total production. One of the most desirable collector models is the 356 “Speedster”, introduced in late 1954 after Max Hoffman, the sole US importer of Porsches, advised the company that a lower-cost, open-top version could sell well in the American market. With its low, raked windshield (which could be removed for weekend racing), bucket seats and minimal folding top, the Speedster was an instant hit, especially in Southern California. Production of the Speedster peaked at 1,171 cars in 1957 and then started to decline.

The 550 Spyder, which took its name because it was the 550th design project undertaken by the Porsche company, made its international debut in…