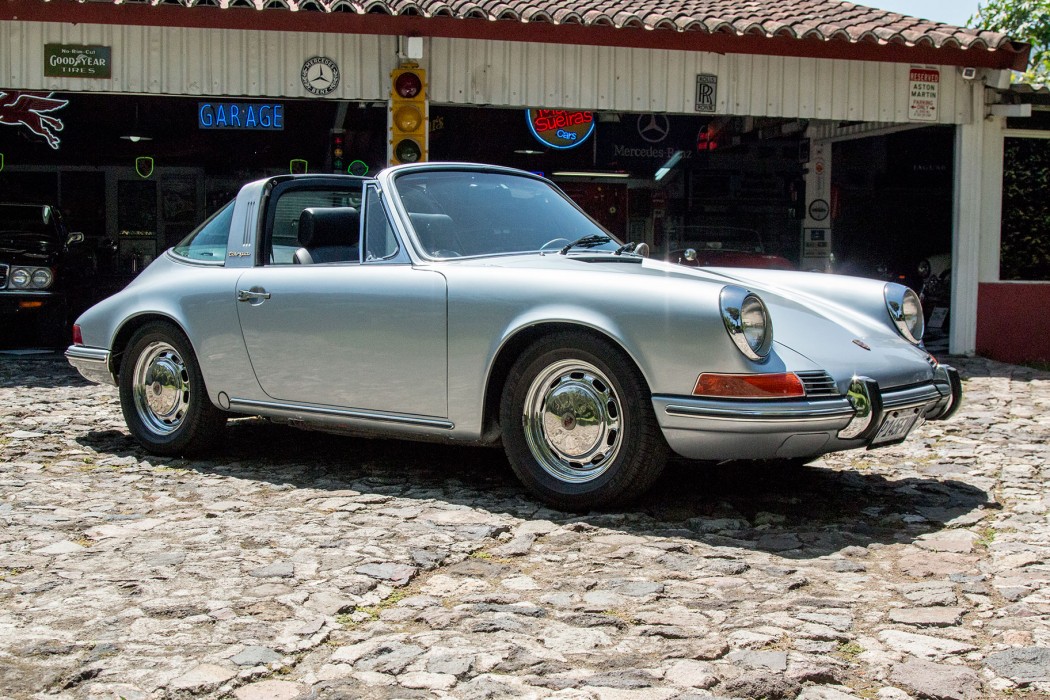 With 356 cabriolet production ending in 1965 and increased safety regulations pending, by 1964 Porsche had create a “safety cabriolet” 900-series prototype, and showed a pre-production Targa® at the 1965 Frankfurt Motor Show. On June 28, 1966 a U.S. patent illustrating the Targa® with its multiple configurations was issued to “Porsche K.G., Stuttgart-Zuffenhausen, Germany.” Early factory workshop manuals called the Targa a “cabriolet”, but absent was the fabric top and frame mechanism. Instead a flat “safety hoop”, in anticipation of future automobile safety requirements, supported both a lift-off folding top, and a separate rear window. (Targa means “shield” in Italian.) Butzi Porsche decided that the rollbar should be covered with a brushed stainless steel surface. Factory window tunnel tests demonstrated that with the top off and rear window up, interior turbulence was low, even at high speeds. 1960 racing prototypes including the 1967 Porsche® 910/6 had appeared in the windows up / top off configuration (the name also acknowledged the factory’s success in the Targa Florio road race.) 912 Targas cost more than the coupes, but provided ‘air conditioning’ without reducing engine performance.

Demand for the Targa far exceeded Porsches sales department expectations and production capacity; from late 1966 until 1969, Porsche® was only able to construct a total of 2562 912 Targas, less than 8 percent of all 912s. Production of the model commenced December 1966 at the Stuttgart-Zuffenhausen factory, with the first ten 911 Targas, and at least three 912 Targas. By early 1967 Porsche stepped up production from seven Targas per day to ten per day, which was only enough to supply German buyers and European tourist delivery. Per the February 1968 issue of Christophorus magazine, the first Targa delivered to an American dealer was a 912 “unloaded at the port of Jacksonville for delivery to Brumos Porsche” in the early summer of 1967.

With production commencing for the 1967 model year, Targas came equipped with heavy transparent plastic rear windows openable with a zipper. Later designated Version I by the factory, these “soft-window” Targas are now extremely rare, with about 200 currently listed in the 912 Registry. In September 1968, Christophorus magazine noted that with the soft-window “The safety hoop is permanent but you can achieve four variations around it, depending on whether roof and rear window are used or removed.” Take off the Targa top (fitting unfolded in the trunk) for a mega sunroof (originally called the “Targa Voyage”). Unzip the plastic rear window and you have a cabriolet with rollbar (originally called the “Targa Spyder”. The 356-cabriolet style tonneau cover shown here was a factory option. You might leave the roof on and the back window down on blistering hot days, cold winter days, or even in a light rain. Button it up for complete enclosure in any weather. In consideration of increasing safety regulations, as of January 1968 Porsche constructed Version I Targas with a package shelf containing two small lockable compartments in place of the rear seats. Yes, 1969 912 soft-windows do exist, with about 20 known 1969 912 Targas registered with us.

In January 1968, Porsche also made available a Version II option with fixed glass rear window, which transformed the Targa into a coupe with removable roof. Advantages of the fixed rear glass included lower maintenance, quieter driving, and electric defrosting (the soft window version had no provisions for defrosting the rear window). The 1969 Porsche factory advertisement “Fact Book” states: “A fixed rear window is an extra-cost option. Rear seats are included in Targas with fixed windows.” These “hard-window” Targas could also be ordered with the shelf and compartments rather than the occasional +2 rear seats. More successful in export markets, the Version II Targa later accounted for more than forty percent of total Porsche production.

In 1969 ventilation slots appeared on each side of the Targa hoop for improving ventilation in both Version I and II Targas. As the Version II became popular, many Version I soft-window Targas were converted to fixed glass (one way to tell, look under the Targa bar where two notches for the tensioning handles were located.) Version II 911 Targas remained in production through the 1980s, while the Version I was only available until 1971.

Return of the Soft-Window. Other sportcar manufacturers in Europe, America, and Asia scrambled to emulate the Targa. In 2011 RUF Automobile GmbH created their Roadster, a tribute to the 1967 soft-window Targa.